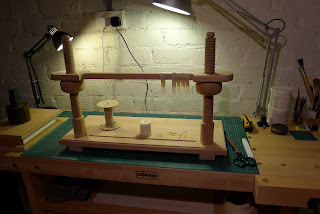 We now need to mark up the book block for sewing.
In the previous post I mentioned Guarding. This is the placing of a piece of folded paper over the fold of the first and last sections. These are sewn into the book and then the endpapers are pasted on to them. Pieces from the spare gilt sections can be used for this.
This is mainly done to stop the first section being dragged open when you open the book.
I personally don’t have a problem with this and find the excess material on these sections can cause resistance when rounding and backing. The book I am making here will not be using them but if you are interested in doing so I can discuss them in another post.

Place some waste board cut to the same size as the book either side and secure it all in a press. Using a carpenters or engineers square mark across the sections between a 5/10mm from the head, and 15mm from the tail. We are going to use three tapes on this book so measure the distance between these two marks and divide it by 4. Mark the waste board at these points.

There are different types of tape. For most case bound books I tend to use a 13mm starched cotton tape. For a Fine Binding, however, I use a 7mm Pliester linen tape. These are easy fray to out for the lacing-in process later.
Place a piece of tape for reference on the three positions marked on the waste board and mark either side. Using the square again mark across the sections at these points. I've also marked a diagonal line near the head. This is just in case the sections were to be mixed up, I can keep track of them during the sewing process. 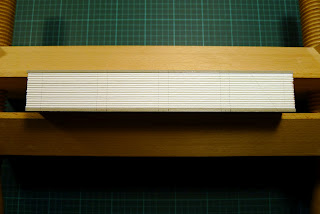 Take the book from the press and remove the endpapers. Square up the book by knocking down to the head and spine and pop it back in the press along with the waste board.
Using a fine toothed saw, such as a dovetail saw or a gentleman’s saw, saw across these marks at a depth of roughly 2mm. Just enough to nick the inner folio of each section. 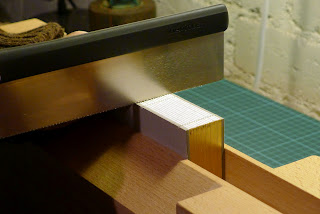 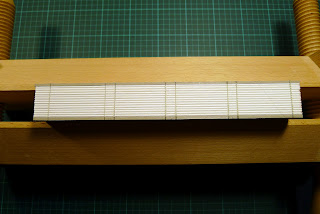 Make a template matching these saw marks and with a needle punch the holes through the double white folio of each endpaper. We do these separate from the rest of the book, as we don’t want to saw through the coloured folio of the endpaper. 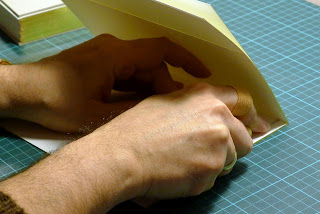 We now need to set up the sewing frame.  If you don’t have a sewing frame, don’t worry. I’ve managed without one for the past twenty odd years simply sticking the tapes to the edge of a bench with masking tape.  The use of a frame though does give a stronger structure to the sewing and in the case of Pliester tapes not being starched; it just makes life that little bit easier.
Cut three tapes at least three times the thickness of the book. Wrap one end around the centre of an ‘H’ key and place it through the slot in the frame base. 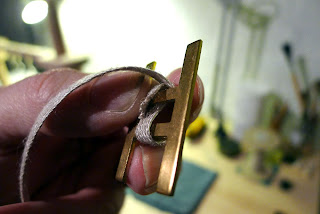 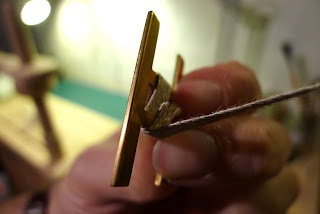 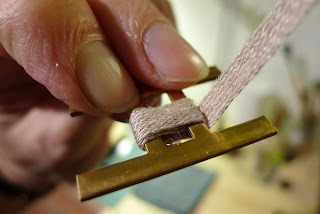 For this binding I’m using a slightly heavier thread than I would normally use. I tend to use a 25/3 Linen thread, which is a good all rounder. The heavier thread is purely so it shows up a little better on the photographs for you. The weight of thread used is important as it aids the swell at the spine when rounding and backing.
Take a piece of thread that’s not overly long. Try and cut enough for three to four sections. Any more than this will just make sewing awkward and just start to get a little worn and dirty. Thread your needle and tie a not at the other end but leave a tail of thread roughly 7cm or so.
Place one or two pressing boards onto the frame base. It will make sewing a lot easier.
Sewing starts on the last section, in this case the back endpaper. Start at the tail hole and enter from the spine. Pull through and exit from the next hole. Sew around the tape and re-enter through the next hole. Sewing continues in this fashion, through the holes and around the tape. Always pull taught but not too tight in the direction of the sewing. 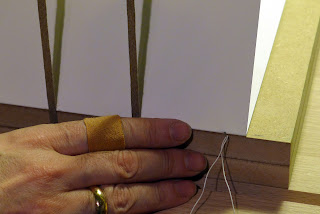 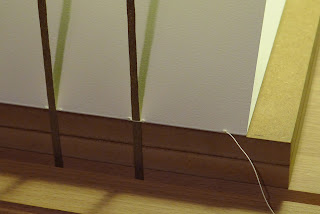 When you exit from the last hole in that section pull taught and place the next section on top. Sew up to the corresponding hole and continue to sew in the opposite direction until the last hole. When exiting the last hole pull taught in that direction and tie this thread to 7cm tail beneath it. These two sections are now sealed at both ends. 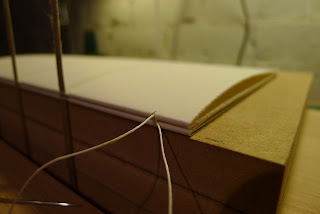 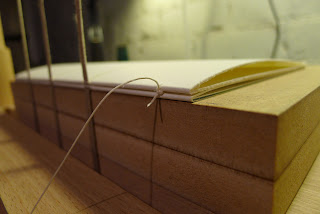 Place the third section on top. Sew up to the corresponding hole; sew along until the last hole is reached. This time there won’t be a tail to tie off onto. From now on we need to tie off with a Kettle Stitch. 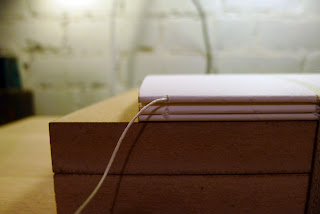 To perform a kettle stitch place your needle underneath the section directly beneath the one you have exited from. 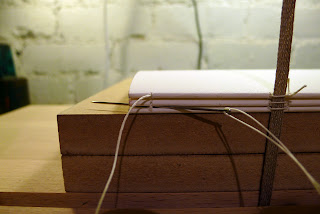 Push the needle behind the last stitch and out of the head/tail. Pull until you are left with a loop and push the needle up through this loop. 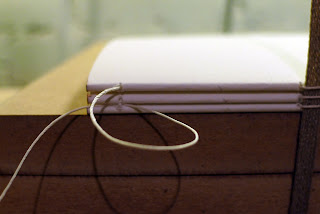 Finally pull up, and then you are ready to proceed to the next section. 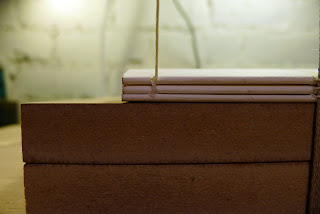 When the thread is about to run out you need to lay in a new thread using a Weavers Knot. It’s best to do this near a tape and not at the ends as it might interfere with backing later.
Cut a new piece of thread and tie a slipknot in one end. A slipknot is made by performing the beginning of a standard knot, but instead of pulling the end of a thread through the loop, you need to grab the beginning of another loop and pull that through. Hopefully the photos make it a little clearer for you. 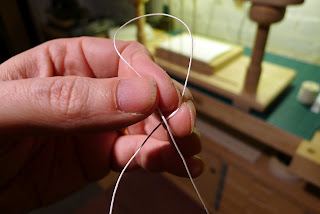 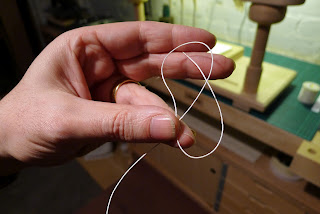 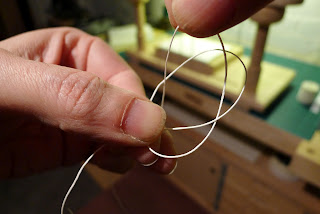 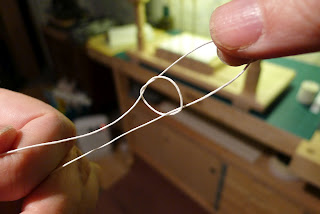 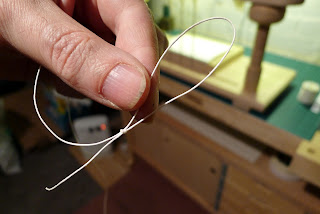 Sewing now continues in this fashion, remembering to kettle stitch at each end. When the final section (the front endpaper) is stitched, finish with a double kettle stitch. Sew a kettle stitch as normal, then do another, but this time go down through the loop created. This will give you a strong knot. 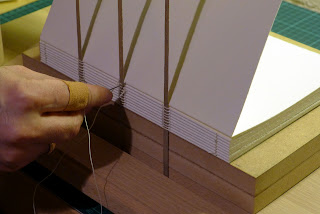 The sewing is now complete. 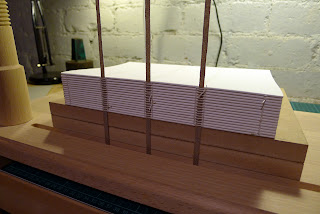 Unpin the tapes from the crossbeam and remove the boards from beneath the book. This allows the H keys to drop and makes them easier to remove.
Our final stage is to ‘tip’ on the endpaper to the first and last sections. Place the book on the workbench fore edge facing you. Lift the endpaper off the book. Place some waste paper over the main body of the first section leaving 3-4mm of the spine edge exposed and paste. Remove the waste and bring the endpaper back over and position carefully. Do the same for the remaining endpaper. I like to use a starch paste for this so you have time to reposition your endpapers precisely. 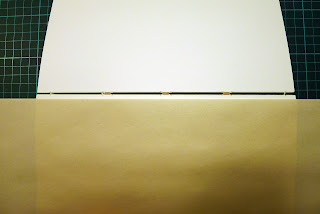 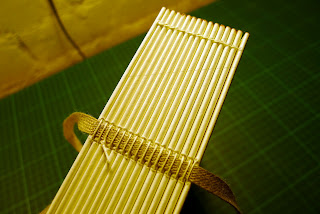 The book is now ready for our next stage, Rounding and Backing.

Roger Grech
On this page I'll try and take you through the processes as simply as possible. Any questions please feel free to ask and I'll do my best to help. Thanks for taking the time and hope you find it interesting.